give me a reason to love you

“It appears my brain has been left behind in dreamtime,”
she said sleepily, to the empty house that held her like a baby bird.
The chimney swifts that had taken up residence in the flue of her fireplace
chirped their too-cheerful agreement.
She downed hot cup of Eight O’Clock French roast,  number three.
Immunity had set in to her last remaining vice.
Save for cigarettes.
Damned devil sticks were next on the list, but not just yet.
Tethers to this earthly plane, they were.  Veritable strings on a floaty red balloon.
A strange and lovely silent tsunami was rolling in.
Slowlyquickly, in stop motion, each second of the rolling monster
a separate sepia-colored print on faded and torn photo paper.
From a great distance, yes,
but the tide
was all-powerful nonetheless. She welcomed it, yearned for it,
arms open wide.
Anything to be engulfed. Anything.
She waited.   Painting, drawing, not sleeping, sleeping in fits, crying, listening to birds, painting, watching rabbits in the yard, feeding peanuts to squirrels, painting, missing the dead, crying, laughing, feeling too much.
Smoking, feeling nothing.  Then back. Bungee jumping of the  most uncomfortable yet beautiful kind. She waited until the bungee cord was stretched so far that she could see the tiny expressions on the carpenter ants’ shiny black faces, looks of shock and surprise at the giant human falling out of their sky.
Only then, THEN, she would snap back. BACKBACKBACK.  Sometimes it was almost too late.
A coma here, some morphine there, a miracle baby, a few teeth knocked out, a charred limb or two.
But snap back she did.
So far.

She anticipated the arrival of the silently roaring tidal wave with quiet yet barely suppressed joy.
Inside the breaking curl of salt and sea was the quantum plane she sought.
Timelessness. No-time. Dreamtime.

Snapping out of her reverie, she placed the empty coffee cup in the sink and glanced at her watch.
Glinting in the sunshine, the tiny gold numbers
suddenly made no sense to her.

“Hmmmm…strange.”
Losing her mind was not something that frightened her any longer these days.
She half-assumed it was already long gone anyway.
Things were different now, though.
She was Somebody’s Mother.

Without further thought, she changed into her camos and a flowered tank top, washed her face, and went outside to work.

She bent over her drafting table, sketching a small black cat.

“Holy Mary Mother of God, pray for us sinners, now and in the hour of our death…”
Maybe if she said this THAT MANY TIMES,
she and her son would be okay.
It worked in the big city at the convent, all alone.

If only she said it THAT MANY TIMES.

Maybe it would work here too. 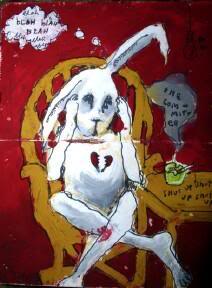 4 responses to “give me a reason to love you”

This site uses Akismet to reduce spam. Learn how your comment data is processed.